Been a while, and Ive now got a

Cant see that I've discussed any of the BMW Saga on here, so here is a years worth of BMW madness within lockdown

August 2020 the first time we were let out to play, Bought it, one owner private sale,

Put it in for a large service and N/S/F Wheel bearing, ended up having one front track control arm and two rear trailing arms? and a set of tyres, OUCH!!

Got it back and still had bearing noise from front, Hmmm, change O/S/F wheel bearing, still noisy, drop oil from front diff, found full of swarf, lots of nasty words, and a feeling of De Ja Vu, Had diff removed, not easy its bolted to the engine sump, with the O/S drive shaft going through a tunnel to the Diff, Give to Pete Solent Gearboxes, phone call, you have wear in only one bearing, but not enough to be noisy?? OK do all the bearings and seals now you have it out, all done refitted still noisy, bugger,

We used it as is, did Manchester, Blackpool, North Wales, noise from a bearing getting worse,

Out of desperation I had the centre bearing in the prop changed, just in case, the idiot doing it forgot to mark the splines, so it went back wrong, now have got awful vibration, fitted second hand prop, that sorted that, found the new centre bearing had de bonded, not good, returned and got money back, suspect made in China although came in Meyle Box?

Went on Holiday to North Devon, going down steep hill gearbox decided to drop two gears almost ripped out the rear axle (that's how violent the happening felt) stuck with trans failsafe on dash and in third gear, cleared the codes, got full use of box back, next steep hill same, cleared codes, next hill drove it manually, all ok,

Right tried to get a decent gearbox chap, all local ones wanted to fit a recon box at over 3K, had noticed a chap recommended on a FB page regarding the 6 speed ZF Box, he had a reputation of a gearbox whisperer,,,,,,,,,,,, I just thought he liked dirty boxes, steady!!! Problem he is in Leicester, Hmmm............. OK arrange to see mother in law in Manchester, leave X5 with said gearbox chappy, and use the wife and her car as onward mobility, this we did, well he stripped the box, declared the E Clutch and bush shot, along with some actuator pistons and the Machronics seals, I don't think ive spelt that right but, he replaced all this, fitted the plastic sump that contains the filter as apparently this allows for greater fluid and better cooling, I've no idea as auto boxes are black magic to me, he heard my tell of woe re the bearing noise and suggested he changed the last remaining bearing, the O/S inner bearing which sits in a cage on the opposite side of the sump to the diff, he found where the swarf was coming from. apparently the bearing there goes for the fun of it and drops its case hardening into the diff, the answer is to fit a totally sealed bearing, with its own seals and grease, this he did

Picked the X5 up and I must say the difference in driving was chalk and cheese, that box had been bad from day one, perhaps why they sold it?

Yup bearing noise still there, well as Sherlock Holmes possibly said, when you have eliminated everything else then the improbable is at fault, we bit the bullet and changed the N/S/F bearing again...................................... Woo Hooo no noise, that has gone back to First Line, with a claim for all the work done to the front end, I am hoping a claim for over 1K scares them into paying for the second bearing to be replaced, I do believe its a case of dream on...........

August 27th were off to Yorkshire for a week, now will we be able to travel in bearing noise free bliss, ORRRRRRR

Oh it needs discs and pads replacing on the front, now the bearing noise has gone I suppose that's the next job, LOL
THEY SAID I WAS DELUSIONAL, ALMOST FELL OFF ME UNICORN

First pic the Accumulator Pistons, from the ZF box, and the other the closed bearing that replaced the open bearing on the O/S drive shaft inner cage. all I have I'm afraid. 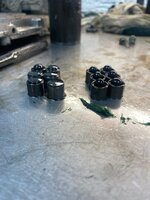 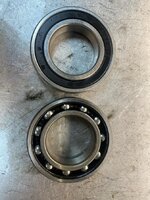 THEY SAID I WAS DELUSIONAL, ALMOST FELL OFF ME UNICORN

It's a start lol

How many cars can someone

How to exclude far East from eBay searches?