Mining Rig fell over but why? Black screen, no response.

Mining rig took a turn for the worse Thursday night. There was a bug when windows drivers would try to install. Cause a black screen lockup. A way around this is to go into safemode and run a utility to clean GFX card drivers. Well went to boot into safemode it never got there, a few restarts and still no dice. Swapped motherboards (i have an identical one in the PC) that didn't work. Put that motherboard back in the PC, it was dead. Seems something is very wrong. The PSU's are a good make, they shouldn't be destroying motherboards. I'll ran more tests. Couldnt even get into the bios. Its just a black screen on power up, no monitor output even with nothing else plugged into the motherboard apart from 1 stick of RAM, the Power buttom and a DVI cable.

No update of the BIOS. The thing Is I took a working PC down to the garage and swapped the motherboard, and it killed that motherboard. Hopefully its only the motherboard. Th scary thing is, I dont know why. Its a PC power supply, nothing special. Just powers the motherboard, the other PSU's are linked by joining the 0V wires only. The other supply's power the GFX cards.

No visual defects on it, and running the motherboard I measured temperatures of all the chips and nothing it getting warm at all.

A new motherboard was needed. I must have done something to damage it. Had to take everything apart, put the GPU's back in boxes, and run some PSU tests.

The board is a Gigabyte GA-H81M-DS2V. Checked all the voltages, nothing dod found.

I found a buzzer I could put on the speaker output of the motherboard. On power up it was a single beep. I done the same test with the RAM removed, and it was a rapid beep. So it does appear that the mother board self tests are functioning. Both motherboards doing the same and no GFX output.

I had a new motherboard/cpu/ram delivered Saturday morning. Set this up on the PC, and found it wouldn't boot from my HDD, it wasn't the correct format, the new bios dosn't have the legacy support, So had to create new windows install onto that. This is okay, to get it to run as a mining machine, there is only GFX card drivers and the mining EXE and tweaking software that needs to be installed. So that dosn't take long.

Tested each GFX card individually in this new machine. All 7 cards are working fine. I feared some were damaged by the mining rig.

The way the mining rig is powered, is 3 x 750watt ATX supplies linked by 2 wires that goes to the mother board. One is 0V, the other is a switch signal from the motherboard to tell the PSU to power on. Measuring 0V between PSU's I saw 24mV difference, so perhaps the 0V connection could have been better. 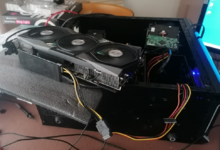 All GFX cards tested okay, so what caused the problem is still a puzzle.

The metal frame the GFX cards sit on wasn't earthed, so added an earth there. (many people put these on wooden rigs, which are also not earthed so I don think this was the issue.)

The risers could have had an issue, there doesn't appear to be any signal buffering there, or on the motherboard. So I can only assume the PCIe signals go direct to the processor. If something got on these signals, I guess it could damage the processor, could be the cause of the motherboard issues. Also why the motherboard passes the beep test, but still no output. 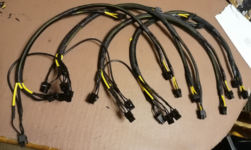 Created this wiring loom to power the risers. The were powered though SATA previously, This has limits, as some cards draw 75W from this interface, which is over the limit of the SATA connector. I changed some before the rig had issues. I wanted to make a proper wiring loom for it. So I made this Friday evening and Saturday morning. This connects 4 PSU's (I had 4 PSU's in the rig, but only enabled 3 previously) this links the 0V together with a good gauge wires,. Also each riser has its own connectors back to the PSU, giving the support for 12 GFX cards. I tested this on the PSU's with no GFX cards, tested all motherboard voltages. I didn't see any volt different between the 0V of any of the connectors, but as there was no load I guess that was to be expected.

Couldn't see anything wrong with the setup. So at this point, I'm thinking it was duff risers, one caused the issue?

Reassembled the rig with 6 new risers. 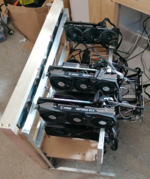 That sounds a bit of a nightmare but at least the GPU's are OK
Sometimes you never find the reason I dismantled a rig to smarten it up and a Radeon VII never worked again, put a different card in the riser and all was fine.

I have always used one PSU per mining rig as I am always worried about startup synchronisation.
So many things cab go wrong with multiple PSU starting up and 0 volts is crucial to all the PCI chipsets
The 1500 Watt PSU's are pricey but it will run 6 3070's and only pull 750 watts at the wall so lots of headroom

The SATA power connectors are a complete no no completely not rated for 75 watts, they are usually wired with 0.25mm^2 they were hitting 80 degrees on my thermal camera under load. Also the crimp quality of the PCI-E crimps on the 6 pin Rise PCI-E to Sata leads is terrible, the thermal camera showed a few of my connectors glowing and the PCI-e Riser shell was going soft. A little pull on the cable and some cables just came out crimp socket

Ebay do kits of PCI-E connectors and terminal pins for £10 for 50 connectors so you can wire up your own looms with quality 1mm cable all the way from the PSU to the risers. They also do pin extractors to get the pins out of the old connectors to reuse the connectors

Hope you have a trouble free time now

Nelly said:
Ebay do kits of PCI-E connectors and terminal pins for £10 for 50 connectors so you can wire up your own looms with quality 1mm cable all the way from the PSU to the risers. They also do pin extractors to get the pins out of the old connectors to reuse the connectors
Click to expand...

Thanks for that idea of where to get connectors from. I have all the risers power connectors now to go direct to the PSU's. Its useful to know they are available so i can make more if need be. Its nice to make things custom for the rig. Too much wire length means you need to bundle it up to keep it tidy, and reduces air flow.

Now if only I could buy reasonably price GPU's .....

Nelly said:
No if only I could buy reasonably price GPU's .....
Click to expand...

I have thought about more cards now NBminer is at 70% on LHR cards. Main issue is the payback on a 3060Ti is 300 days after electric even with NB miner and Ethereum is moving to proof of stake in December. Could mean the market will be flooded with cheap ex mining cards when the Ethereum party is over. Its a difficult call to make while all my current cards are paid off and working well.
N

I found my rigs were much more stable after I beefed up all the riser cables with decent gauge cables and got rid of those SATA plugs on the risers. I also beefed up the PCI-E power cables to 2mm^2
I would recommend using both motherboards as the less cards in a motherboard the more stable it becomes and the less PSU's fighting each other issues.
I had 12 GPU's in my HS110 Pro BTC motherboard but it fell over nearly every day usually at night and took 6 hours to notice and get back online.
I run 6 GPU's per mobo now and usually get 2 weeks before a lockup requiring a reboot.
Last edited: 14 Sep 2021

Staff member
Well if it wasn't for last night I would have said mine has been running without issues for a long time. However windows decided to do an update, and shut its self doen. A power cycle it's now fine. I have tried many ways to stop updates, but they still keep happening. I think if this happens again I'm putting in a firewall that will only let me VNC or it let's it connect to the mining places.

I wonder what will happen when ETH is no longer minable, there are many other coins, but many relate to ETH. All the cards have paid for themselves right now, would take around 7 months for the 1660 to pay for themselves.

Moved GPU's into a purpose made drawer