Added a vent to the Garage

Staff member
The garage gets a tad warm due to what i have running in there. i do have a 6inch hole which i used for Aircon, without the aircon attached its a nice was to get air into the garage.
After running the car for a bit in the garage it nice to have some fume extractor, or use it for heat extraction.

Planning the place to put the vent mainly depended on height, as higher up is where the hot air would tend to be. Also somewhere to place it where it has power and not obstructiing anything else. 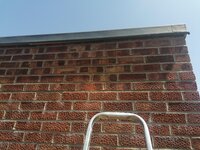 Got my SDS drill ready with a 107mm core drill bit. 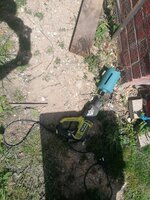 Started off good, but then the hammer action packed up. This was probably caused by the 150mm hole I drilled last time, it struggled and greese was pouring out the chuck. 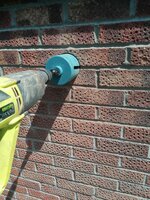 Had to purchase another drill. This one I has was 2J, and its very powerful, Sarahs dad used to borrow it as it easily drilled holes in his concrete house.
The new drill was from Screwfix was in stock, and its hammer action is 8J. 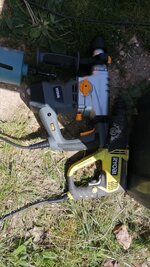 Wow, its easily blasted through, I had to hold it back It was eager to take out anything in its path. 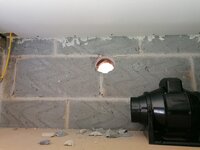 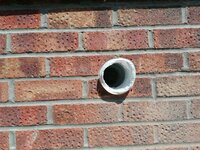 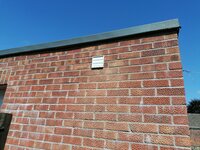 Looks pretty good on the inside too. All wired into a Kasa unti, so I can turn it on and off from my phone. 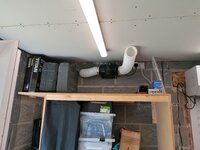 it's done know but if theres a next time dont use it on hammer it knackers the drill plus can take the teeth of the core drill and if you hire a core drill they charge for wear or damage ,
thermolite blocks are very soft,

its the red v6 thats parked in garage thats needs TLC not the computers lol,,,,,,
Upgrades = Saleen supercharger kit with JDM tune, 3.4 pulley , keene bell boost a pump , 62mm Twin Throttle body with spacer, EBC drilled grooved vented discs up front with red stuff pads all round , Boost gauge and Fuel psi gauge ,oil seperator, Additional cooling fans for heat exchanger, 7 row oil cooler BMR rear lower control arms. Exedy stage 1 clutch kit. 481Bhp total. Plus all the normal refinements you get with a saleen mustang production number 192 of 945 for that year.. New PB at santa pod 12.75sec 1/4 mile
See xmas toy project in readers rides for my 79 Trans Am on going project , In my stable is a 2005 saleen mustang 79 Trans am 69 Chevy El camino el camino now sold TRANS AM MIGHT BE UP FOR SALE IF ANYBODY INTERESTED ???
You must log in or register to reply here.

Crypto mining as a business.

How to exclude far East from eBay searches?

Monitor slow to come on
2