What is antifreeze? And how to check your engine coolant level

As the name suggests, the primary function of antifreeze is to prevent your car's coolant from freezing in low temperatures (with coolant being a combination of water and antifreeze). All liquid-cooled cars depend on antifreeze to keep going in cold weather and there are a number of different types to choose from. So In order to understand what antifreeze is, first you need to know where it goes and what it actually does.

The varying colours of the fluid - usually pink/red, blue, or green - are the most obvious sign that there are, in fact, a variety of antifreeze types but all undertake the same crucial job. They prevent the coolant from freezing, allowing it to continue carrying excess heat away from the engine, dispersing it via the radiator and keeping the engine at the optimal operating temperature.


Coolant works to prevent the engine from overheating when the engine is running, but when you switch the engine off, the coolant stops flowing and temperatures drop down. This is where the antifreeze comes into play, especially in colder climates, as it works to prevent the water in the mixture from freezing and expanding. If the coolant were to expand, this could cause a range of problems, including leaks or even a warped cylinder head.

On top of lowering the freezing point of the mixture, antifreeze also serves another purpose - it acts as a lubricant/protector for the engine internals. Most engines are made from either iron or aluminium, and both materials which can be corroded by water. Therefore, modern antifreeze coolant contains chemicals which protect the internals of an engine from corrosion - including the water pump, which is often located in awkward places that make repairs expensive.

What are the different types of antifreeze?​

As with many fluids for your car, there are a number of variants of antifreeze to choose from. An antifreeze’s type depends on the ingredients on which it is based. Two of the most common types are Inorganic Additive Technology (IAT) and Organic Acid Technology (OAT). Different cars will require different types of antifreeze, as the wrong type could lack the protective qualities that your engine needs, causing premature wear or damage. So, as always, the best way to check which type of antifreeze is correct for your vehicle is to either refer to the owners’ handbook or ask your local motor factors, dealer, or garage.

How do you check your car's coolant level?​

There are two common ways to do this, and it depends on the cooling system your car has. Firstly, there are systems which have a coolant reservoir that allows the coolant level to change as the system heats up without dumping fluid. To check the level of a system like this, follow the steps below:

Check engine coolant on cars with a reservoir​ 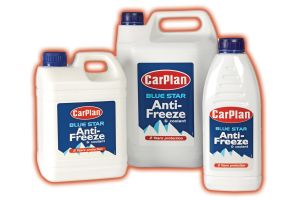 Check engine coolant on cars without a reservoir​

There are also systems which do not have a reservoir. They may have an overflow tank where water can be released to, but it cannot return to the engine.


If your coolant is below the minimum, you will either need to top it up, or even better, drain the system and replace the coolant. A mechanic will be more than happy to replace your engine coolant for you, and it should be a reasonably inexpensive job.


If you decide to do the work yourself, there are a couple of things to bear in mind. Firstly, most modern cars have completely sealed systems, meaning coolant should only need replacing if there has been a leak, so it may be worth investigating that first. Also, the different types of antifreeze do not mix and can have adverse effects on your car, so make sure you get the correct one.

Have you had any cooling-related horror stories? Let us know in the comments below...

S
How to check and top up your engine oil

18 Dec 2020
Auto Express
A
T
How to pass your CBT test: motorbike and moped training explained

29 Jul 2022
Tristan Shale-Hester
T
C
Car leasing with insurance: what is it and how does it work?