Whether or not you think Tesla is an over-hyped company, or that its cars are deserving of the adulation that they regularly receive, you can’t deny that company founder Elon Musk has shaken up the market with products that are like nothing else. Not only that, but Tesla has also set up a charging infrastructure that’s the envy of its rivals.

Tesla was founded in 2003 and its first car, the Roadster, was introduced in 2005. Effectively an electrified two-seater sharing much with the Lotus Elise, the Roadster sold in tiny numbers. It wasn’t until 2012 that we saw the first mainstream Teslas: the Model S, followed shortly by the Model X SUV. That’s just over eight years ago, so when you look at what Tesla has achieved in subsequent years, it’s quite remarkable.

The Model X was unveiled back in February 2012, but the first production cars weren’t delivered in the US until September 2015, and UK cars arrived in spring 2016.

At launch, buyers could choose between the 60D and 90D, with the P90D arriving soon after. The D stands for Dual Motor, which signifies four-wheel drive, while P stands for Performance, so there’s a higher-rated electric motor at the rear: the 90D had 416bhp and 660Nm of torque; the P90D raised this to 464bhp and 830Nm. The 100D and P100D variants that followed in 2017 had the same power outputs, but a bigger battery pack for a greater range.

Which one should I buy?​

We’d go for the Model X with the biggest battery that you can afford, while constant updates mean the newer the Model X that you buy, the better built, more highly specified and more reliable it’s likely to be.

From summer 2019 the Model X got a faster charging rate (200kW), adaptive air suspension, a longer range, plus more power and torque – although Tesla doesn’t quote any figures for these. All Model Xs come with a 17-inch portrait touchscreen with navigation and DAB (with an ‘ultra-hi-fi’ audio option), a rear parking camera, keyless go, a powered tailgate and electric operation of all doors. 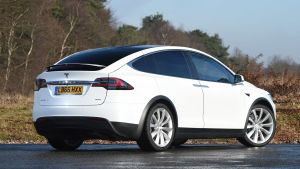 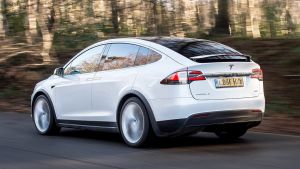 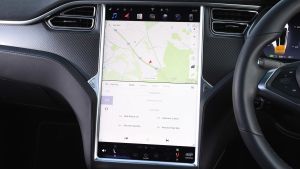 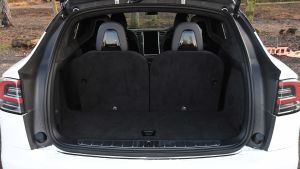 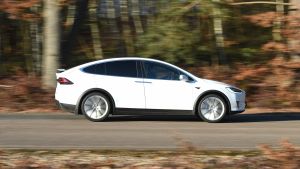 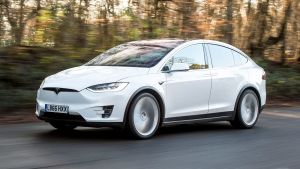 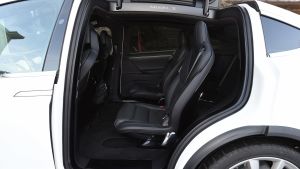 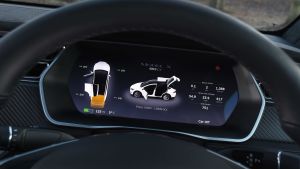 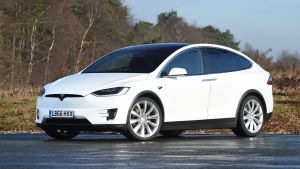 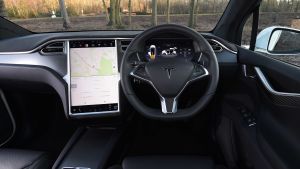 Key options include the full Auto Pilot driver-assistance system (which is seen as being very desirable by used buyers), bigger (22-inch) alloy wheels, an Alcantara headlining and a towing package.

Alternatives to the Tesla Model X​

When the Model X was introduced it was in a class of one, but in spring 2018 the Jaguar I-Pace arrived (from £63,495) and this model is readily available if you want a pure-electric SUV; we found more than 300 used examples for sale, priced from £43,500. With its large cabin, spacious boot and impressive dynamics, the I-Pace is very desirable.

The Audi e-tron arrived at the end of 2018 (from £70,805), looking very conventional and having a comfortable, user-friendly cabin. The e-tron is impressive but expensive to buy, and it lacks the Model X’s impressive range. The Audi isn’t especially plentiful yet, either, with prices starting at £50,000. It’s a similar story with the Mercedes EQC, which arrived last July (from £65,640) and starts from £57,500 used.

What to look for​

The battery and motor have eight year/unlimited-mileage cover; it’s four years/50,000 miles for the rest of the car.

The 22-inch alloys can cut the range significantly. Compared with 20-inch wheels, mileage can be as much as 15 per cent less.

The car’s ‘falcon-wing’ back doors have been known to work erratically and rub against the bodywork, damaging the paint.

A rare feat for an EV, the Model X makes a great tow car. You can pull around three tonnes with one, although this varies according to model.

The Model X’s interior is impressively spacious; in five-seat form it’s especially roomy. There’s a six-seat option (2/2/2) and a seven-seat set-up, too (2/3/2), but the third row isn’t suitable for adults because the sloping tailgate restricts headroom.

The design arguably lacks flair – although this is subjective – and some material quality disappoints, but it’s generally user-friendly ergonomically. That said, the massive central screen for controlling the majority of the car’s functions definitely isn’t for everyone. More impressive is the carrying capacity; the front boot can stow 187 litres, and the cabin up to 2,367 litres depending on the configuration.

Check out the latest used prices for the Tesla Model X on our sister site Buyacar.

Tesla makes a big deal about the fact that you don’t have to worry about regular servicing, which makes ownership cheaper. There are no set service intervals, but it’s recommended the brake fluid is checked every two years (£20) and if it needs to be replaced, budget £180.

If fitted, the HEPA cabin air filter should be replaced every three years (£140), while it’s recommended the air-conditioning is serviced every four years for around £140. Tyres last around 15,000 miles, with high-quality replacements being £600-£1,000 per set, depending on brand and diameter. Some Model Xs have free, unlimited access to Tesla’s Supercharger network, which can slash running costs. Check the car’s My Tesla account, which will say if it’s eligible, because this benefit transfers with the car.

Tesla has recalled the Model X a total of three times so far in its life. The first campaign was launched in April 2017, because 1,466 Model Xs made between February and October 2016 were fitted with faulty brake calipers, leading to the electronic parking brake potentially failing to either engage or disengage properly.

The passenger airbag failing to deploy was the reason for the next recall, which came in June 2017; this time 1,501 Model Xs were affected. All that was required to put this problem right was a straightforward software update.

The most recent recall was issued in October 2017 because of faulty second-row seat-latching mechanisms. There were a total of 414 Model Xs involved in this, all built between October 2016 and September 2017; the solution from Tesla was to adjust the seat-recliner cables.

That was once in 2016, but impressively it came first overall and had lots of category wins, too, with owners loving just about every aspect of their cars. Overall, Model X owners tend to love their cars, but some have tales of woe.

Few cars polarise opinion like the Model X. From its size, weight and exterior design, to its ‘falcon’ doors and electric drivetrain, there are plenty of reasons to either love or hate it. We generally love it, although it’s certainly not perfect. For starters there have been a few issues with build quality, while purchase costs are high, although compared with the key rivals mentioned above, it’s hardly overpriced. This is a car with a huge cabin that can transport seven people at speed across large distances with minimal running costs. Technologically advanced, distinctively styled, easy to live with and supremely comfortable, the Model X is costly to buy – but that doesn’t make it poor value.