Toyota has given the Camry saloon a minor styling and trim update for 2021, when it goes on sale early next year.

Exterior revisions for the updated Toyota Camry are limited to a new front bumper with a couple of extra vents, a reshaped radiator grille and a pair of new alloy wheel designs in either 17 or 18-inch diameters.


The revised Camry’s cabin looks almost identical to the outgoing model’s, although there are a few new trim options, including a choice of three new instrument panel finishes in either wood-effect, titanium-effect and a geometric-patterned plastic shroud. Buyers can also choose from either beige or black perforated leather upholstery.

However, the biggest change to the Camry’s interior is a new nine-inch infotainment system, mounted on top of the dashboard. It replaces the old car’s centrally mounted seven-inch screen and adds support for Apple CarPlay and Android Auto – compatibility the old unit was lacking.

Buyers also get extra safety equipment, such as lane-keeping assist, emergency steering assist and an intelligent adaptive cruise control system, which can recognise changes to the speed limit and automatically match the car’s speed to other traffic.

The Toyota Camry is only available with a conventional hybrid powertrain. The system comprises a 2.5-litre four-cylinder petrol engine, an electric motor and a compact battery pack. 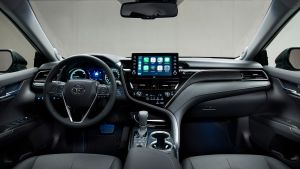 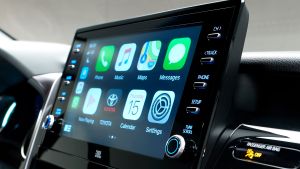 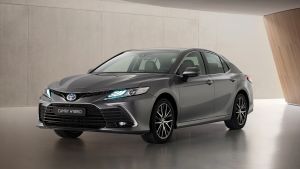 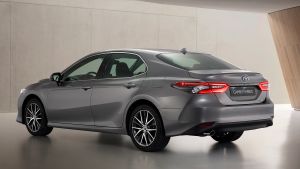 The combined output of 215bhp and 221Nm of torque is enough for 0–62mph time of 8.3 seconds and a top speed of 111mph. More importantly, the Camry’s hybrid powertrain delivers claimed WLTP fuel economy figures of between 50.4–53.2mpg, while only producing between 120 and 127g/km of CO2.

Final UK specifications for the revised Camry are yet to be confirmed, but Toyota has said that they’re unlikely to change much over the current model. So, the entry-level Design variant will still come as standard with 17-inch alloy wheels, heated and power-adjustable front seats, front and rear parking sensors, LED headlights and dual-zone climate control.

Toyota brought the Camry back to the UK market in 2019, after a 14-year hiatus – a decision which was partially motivated by the brand’s desire to give fleet customers a saloon option, as that’s one of the few segments in which the body style still sells well. Toyota was also keen to provide an improved replacement for the slow-selling Avensis.

During the car’s original launch event, a company spokesperson told Auto Express: “The Avensis, like the Carina E before it, was specifically designed for the European market. In recent years the size of the D-segment [Mondeo class] of the European car market has steadily declined, impacting Avensis sales. We’ve been closely monitoring the situation for some time and we’ve decided to cease production of the Europe-specific Avensis.”

What do you make of the updated Toyota Camry? Let us know in the comments section below…

L
Toyota Camry gets fresh looks and more equipment for 2021

Avalon ends in 2022, as Toyota sharpens focus on crossovers and SUVs