This is the Airspeeder Mk3; the world’s first electric flying racing car. Once considered the work of science fiction, the company is now ramping up production to launch the first races in the second half of this year.

Airspeeder’s sister company, Alauda Aeronautics, is currently building 10 examples which will compete in remotely piloted races first – although it is already planning a series of piloted events in 2022 if the concept works.


The Airspeeder is built around a carbon fibre tub and features a rotor blade on each of its corners, which the firm says gives it far greater turning ability than a traditional helicopter or a fixed-wing aircraft. Through a particularly fast bend it’ll generate 5G, exceeding that of a Formula One racer.

Each vehicle will produce 429bhp, more than an Audi SQ7. Airspeeder also says that, because of its nimble 130kg kerb-weight, the octo-copter has a greater thrust-to-weight ratio than a F-15E Strike Eagle (3.5 for the flying car, compared to 1.2 for the fighter jet). The ultra-light construction also means that 0–62mph is dealt with in just 2.8 seconds. 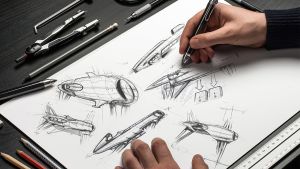 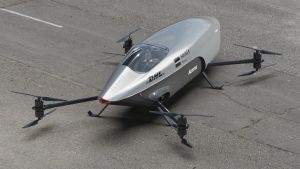 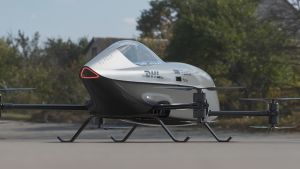 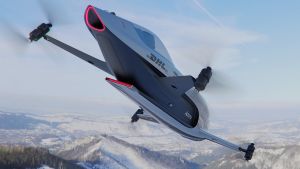 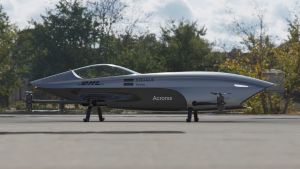 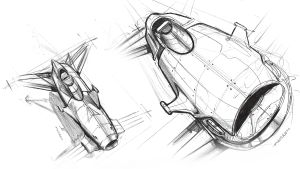 The company has called on the experience of some big names for the EV’s development, including McLaren, Tom Walkinshaw Racing and Brabham for the motorsport aspect. Brett Hill is leading the aerospace side of the project, thanks to his experience as a flight dynamics specialist on the Boeing 747-8 programme.

The races will also play out in much the same way as a Formula One event, only taking place in the air rather than on the ground. Each octo-copter will also have to take regular pit-stops for battery changes, which Airspeeder says have been trimmed down to just 14 seconds thanks to its new quick-release battery mechanism.

Felix Pierron, Head of Design for Airspeed and Alauda, said: “My first principle is that our Speeders are racing craft first. In ideating a design approach I explored the classic forms of racing cars from the 1950s and 1960s.

“This was a time when the requirement for beauty was equal to technological and aerodynamic necessity. As a designer, there is no better place to start. I am excited to see something that started as a vision on paper taken to the air.”