Bentley has revised the Flying Spur for 2022, by adding some more factory-fitted equipment and expanding on the saloon’s already extensive list of customisation options. The updated model will go on sale later this year, with prices starting from £160,200 for the 4.0-litre V8 and £177,200 for the 6.0-litre W12.

Bentley’s biggest update for the 2022 Flying Spur is its “City Specification” package, which was an optional extra on the old car. It now comes as standard and adds a host of extra technology, such as an electric bootlid, a top-view camera, auto-dimming mirrors, traffic sign recognition and puddle lighting.


Bentley also fitted its Air Ioniser as part of the update. The system pushes negatively charged particles through the Flying Spur’s air conditioning system, causing dust and contaminants to clump together and stick to the nearest surface. Bentley says the system improves the quality of the cabin air and benefits the occupants’ “feeling of wellness.”

There’s a few more customisation options, too, including a new Cambrian Grey paint finish and a choice of new open-pore dashboard veneers in either Liquid Amber, Dark Burr Walnut or Tamo Ash, each of which are finished by hand to preserve the natural grain of the wood. The process also means that each dashboard panel is unique to each car.

Bentley also says its engineers have made strides in eliminating noise, vibration and harshness from the Flying Spur’s cabin with a new virtual prototyping programme, which can pinpoint any unwanted sounds in the cabin before the car is finished. The company’s engineers can then tweak the sound deadening to suit.

Bentley’s quest to create a completely silent interior environment for the Flying Spur stems from the company’s founder, W.O. Bentley. Back in 1930, at the launch event for the Bentley 8-Litre, he famously said: “I have always wanted to produce a dead silent 100mph car, and now I think that we have done it.” 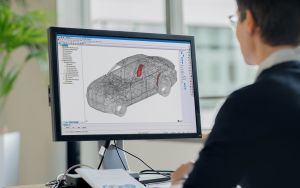 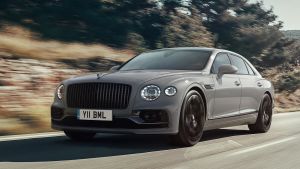 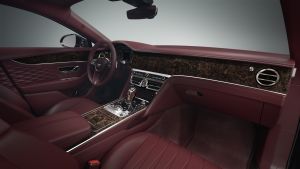 The virtual prototyping system has also allowed Bentley to trim some excess weight off some 40 individual components around the Flying Spur’s chassis. The firm hasn’t disclosed anything so vulgar as specific weight savings or performance gains, though – the brand’s focus here was to improve comfort by giving the suspension less mass to haul around.

As an added benefit, Bentley also says its virtual prototyping system is better for the planet. Simon Noble, an acoustic engineer for the brand, explained: “Virtual Prototyping means fewer prototypes have to be built, and we reduce our testing mileage. It also helps influence the design and engineering of the car at an early stage and affords significant benefits in the extensive testing phase.”


This, in turn, cuts back on waste, which is a key pillar of Bentley’s Beyond100 business strategy that will see the brand become completely carbon neutral by 2030. After that the company aims for its operations in Crewe to be climate positive.

We’re still on fossil fuels for the time being, though, which means the range-topping version of the updated Flying Spur will still be powered by the same 6.0-litre W12 engine as the old car. The unit produces 626bhp and 900Nm of torque, which Bentley says is enough for a 0–62mph time of 3.7 seconds and a top speed of 207mph.

Recently, Bentley added a twin-turbocharged 4.0-litre V8 to the Flying Spur line-up. With 542bhp and 770Nm of torque on tap, it’s a bit less powerful than the W12. However, it still has enough grunt to get the saloon from 0–62mph in 4.1 seconds, which is thanks in part to a 100kg weight saving over the larger engine.