Keyfob change for Hyundai i20

Staff member
Ther buttons were worn on the keyfob. So brought an overlay that just clicks in. This was useless it kept falling off, even tried glue around the edges.

So the next thing to try was to buy a keyfob. I found a pair that looked the same.

So all that was needed was to extract the PCB and key part from the old and fit to the new. This was a little fiddly expecially the spring and button bit, a lot to hold together. It was a good fit, and a screw to hold it in place. The original keyfob was glued together.

However at 5.15am this morning auntie tried starting the car, it did not start, so I got a phone call.

Fetched the old one out of the bin, was it the metal bit down the side some sort of RF imobiliser?. Looking in the old plastic, found sometihng that looked odd. Under a stuborn plastic cover I originally though was the LED difuser, was actually a no contact black chip. Managed to extract it from the old keyfob and insert it into the new. 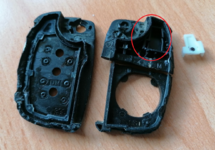 The car started fine then.

Well done doggies you made my day lol oh and well done for sorting for not testing it the 1st time lol.

It's called I beleave a trans sponder but I might be wrong. But at least you didn't have to pay garage rates
Upgrades = Saleen supercharger kit with JDM tune, 3.4 pulley , keene bell boost a pump , 62mm Twin Throttle body with spacer, EBC drilled grooved vented discs up front with red stuff pads all round , Boost gauge and Fuel psi gauge ,oil seperator, Additional cooling fans for heat exchanger, 7 row oil cooler BMR rear lower control arms. Exedy stage 1 clutch kit. 481Bhp total. Plus all the normal refinements you get with a saleen mustang production number 192 of 945 for that year.. New PB at santa pod 12.75sec 1/4 mile
See xmas toy project in readers rides for my 79 Trans Am on going project , In my stable is a 2005 saleen mustang 79 Trans am 69 Chevy El camino el camino now sold TRANS AM MIGHT BE UP FOR SALE IF ANYBODY INTERESTED ???
You must log in or register to reply here.

Been a while, and Ive now got a