BMW has started testing the i Hydrogen NEXT SUV on the road. The hydrogen fuel cell vehicle is set to enter a pilot production phase in 2022, with the German firm aiming to put it into series production in 2025, depending on market conditions and infrastructure support.

BMW has already tested the car’s various systems (namely, the hydrogen storage tank, battery pack and electric motors) individually, but this is the first time the drivetrain has been assessed in its entirety under real-world conditions.


Over the coming months, BMW’s engineers will drive a fleet of i Hydrogen NEXT prototypes over thousands of miles in real traffic to evaluate the efficiency, reliability and safety of the technology, while considering the convenience of the current hydrogen infrastructure.

Frank Weber, BMW’s board member for development said: “Hydrogen fuel cell technology can be an attractive option for sustainable drivetrains – especially in larger vehicle classes. That is why road testing of near-standard vehicles with a hydrogen fuel cell drivetrain is an important milestone in our research and development efforts.”

New 2022 BMW i Hydrogen NEXT: design and powertrain

The BMW i Hydrogen NEXT shares its body-in-white with the current-generation X5, albeit with a handful of cosmetic alterations that mark it out as one of the company’s eco models. There’s a unique blue-tinted radiator grille, a set of lightweight alloy wheels and a revised rear diffuser with blanked-off exhaust outlets and blue trim.

It’s powered by a pair of electric motors (one at each axle), which have a combined output of 369bhp. They’re the company’s fifth-generation eDrive motors, which also feature on the new i4 saloon and the upcoming facelifted iX3 SUV.

However, instead of pulling stored electrical energy from a battery pack like a conventional electric car, the i Hydrogen NEXT generates its own electricity through a chemical reaction between stored hydrogen, and oxygen from the air, via a fuel cell. As such, the only on-road emissions generated by the vehicle is water. 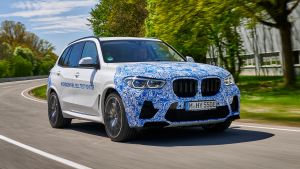 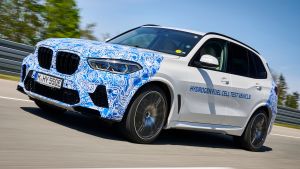 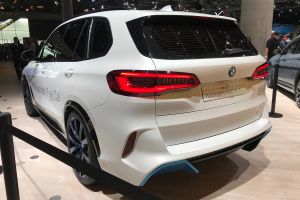 BMW i Hydrogen NEXT - Frankfurt rear 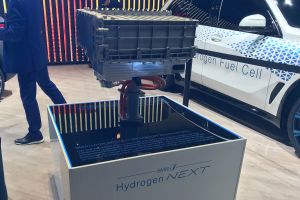 BMW i Hydrogen NEXT - Frankfurt battery 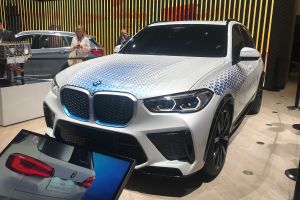 BMW i Hydrogen NEXT - Frankfurt front 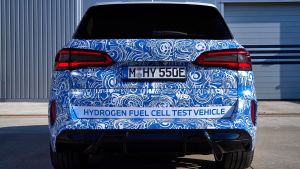 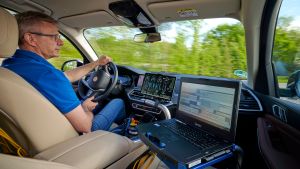 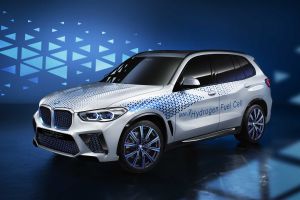 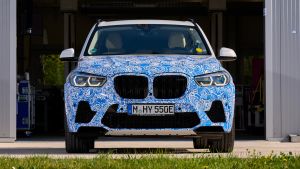 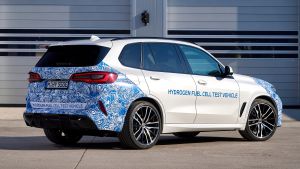 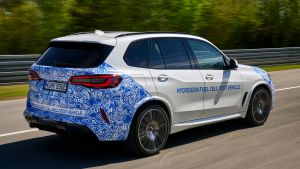 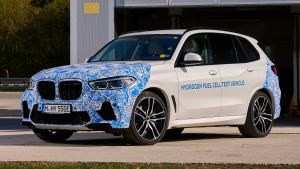 The fuel cell is supplied by two 700-bar storage tanks, which occupy the same space as the gearbox and driveshaft in the combustion-engined X5. Together, the tanks can hold six kilogrammes of hydrogen.

BMW says this guarantees a long range regardless of the prevailing weather, unlike a traditional battery electric vehicle, whose usable range generally decreases in colder conditions. Refuelling also only takes around four minutes, which is a huge saving over the hour-and-a-half average charge-times of current conventional electric vehicles.

Other claimed advantages a hydrogen-electric vehicle has over a traditional EV include suitability for towing and no compromises on passenger comfort, due to the lack of a heavy lithium-ion battery pack and the stiffer suspension required to support it.

BMW drew on Toyota’s expertise when designing the i Hydrogen NEXT by using the Japanese brand’s fuel cells. They’ve already proven their worth in the Mirai, which works in much the same manner as BMW’s new hydrogen vehicle.

The pair have worked collaboratively on the project since 2013, with a small fleet of hydrogen-powered BMW 5 Series GT prototypes entering development in 2015. The two companies also signed a product development agreement in 2016, with the aim of producing scalable modular components and fuel cell drive systems for hydrogen-powered vehicles.

What do you make of the BMW i Hydrogen NEXT prototype? Let us know in the comments section below…

A
BMW i Hydrogen NEXT testing - pictures